Beers back on the Menu! 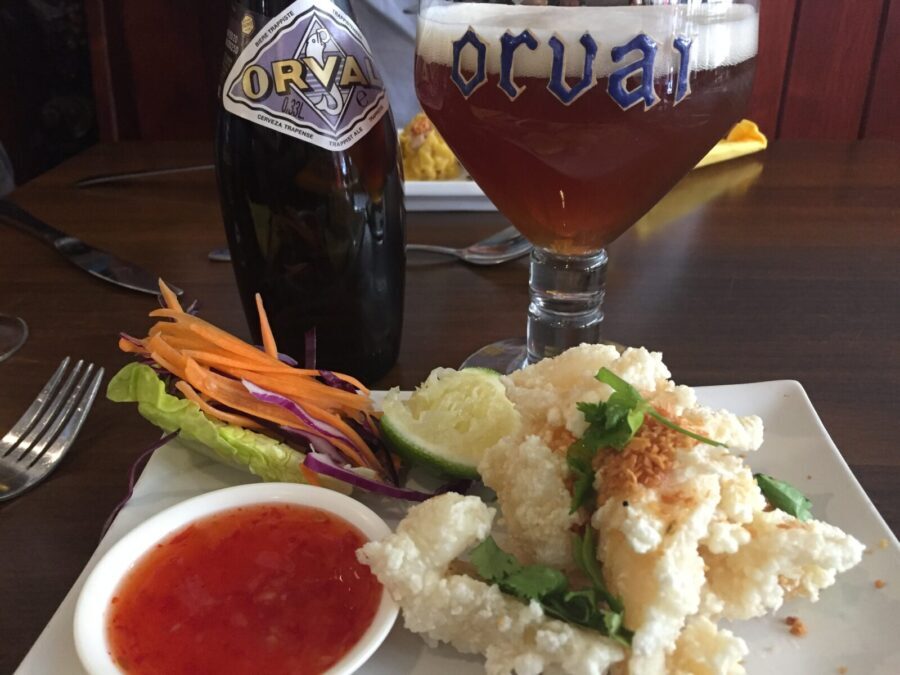 Where do you start with beer & food matching? This article introduces you to some of the methods used in the industry. Then personal suggestions based on some well-known beer styles.

Pairing Beer with Food is a bit like a slow-moving rollercoaster in the UK. Pre WW1 it was the everyday match with a meal, but disappeared from the UK psyche. Then a gradual resurgence began to put beer back on the menu around the same time as the movement in Craft Beer. Led by award winning writers like Garrett Oliver and Michelin Star Chefs (incl. Tom Kerridge & Galton Blackiston) there has been a growing appreciation of the different taste sensations that beer has to offer.

My first experience of a beer paired menu was in the family run restaurant, Den Dyvers in the heart of Bruges (under new management). Here 7 cordon bleu courses were presented with a specially curated beer. I still head to Belgium for my masterclass in this skill to either, Hommelhof in Watou or the Orval Ambassadors restaurant in Veurne, ‘T hof van de Hemmel.

How can you pair your food with beer?

We have been matching beer and food for centuries, forming regional ‘Golden Triangles’. Matching terroir with terroir works, so go local is a beginning. Rich fruit cake with a porter is a good example or a German smoked sausage with Schenkerla Rauchbier (smoked).

If you are a confident beer drinker then you could follow the AB (Academy of Beer) or CAMRAS 3 C’s: Cut, Complement and Contrast. Here you look for an element in the beer and food that does 1 of these. So, a malty porter will Complement fresh brown bread.

Whereas the BPET and Cicerone Certified Beer Server use ABC: Align, Bridge, Contrast, (here look for 2 areas of synergy). Rich beef stew, Aligns with the stewed fruit of a Olde Ale and Contrasted by the Balsamic notes of the beer.

Simpler ideas are also around. The Academy of Cheese suggests, Simple flavours (taste (mouth)) and Complex (Aroma). Matching 2 Simple with 1 Complex. This aims to achieve a, ‘Golden Triangle of flavour known as Comfort Food Spectrum’.

Greg Engert, separates beer into 7 categories and if you are new to Beer & Food matching these are good starting points. 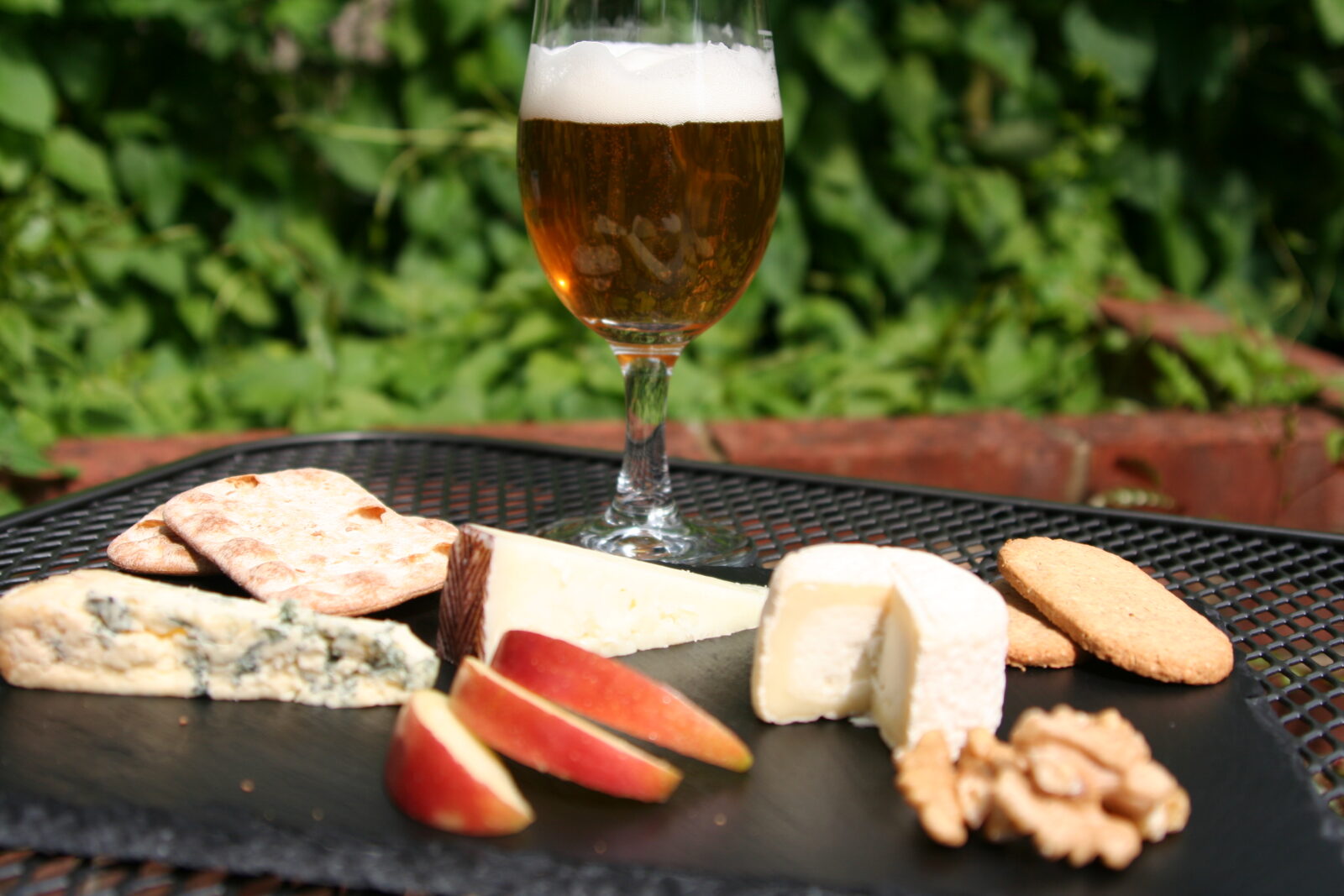 Noble (traditional beer styles) These tend to have woody, earthy and grass notes, traditional English bitters, Pale Ales, IPA’S there is some sweet malt notes as the base to the beer. I like to match these with aged cheddars or rich meat dishes.

Whereas beers from the USA, New Zealand and Australia (inc versions made in the style of). These hop dominate beers are aromatic, with pine, resin, citrus and tropical fruits, matching fried foods even pepping up a spicy chicken as the hops interact with the chilli making them hotter

These are more malt forward, they have a bit of hop bitterness but with added biscuits, hazel nuts and toast (not burnt), tending to be sweeter, English mild’s, dark lagers and bocks

They can also display dried fruit, marmalade, plums and toffee. My personal favourite is to go against the grain with a curry as they reduce the heat bringing out the complex spice. Also try

Hello to the coffee and chocolate, bitter or sweet, with medium to a light mouthfeel. The sweeter milky styles include, Porter, Brown ales and Sweet stouts. Imperial stouts and Black IPAs roastier, with the addition of stewed plums, cherries and prunes.

These beers are the BBQ’ pal, perfect for the burnt caramelised edges of pork ribs, Christmas cakes and beef wellington

These are beers that used either smoked malts in the making or have had it introduced via barrels. They can be intensive Rauchbier’s or more subtle, traditional pairings are sausages, yet I really enjoy these with oily fish

A complex area, they can be those that have had fruit / spice introduced in the brewing / storing these include Wit biers, Belgian strong (blond, pale and tripel) and Saisons. Happy meetings are white fish, salads and fried food.

Or liquid versions of Christmas in a glass, dark rich and fruity with sweetness and spice, Dunkleweizen, Dubbels, and Quads can work with tomatoes, dark meats and sticky toffee pudding.

These are some of the oldest beer styles in the world. Gueuze, Fruity Lambic, Old Ales, Flanders Reds, Wild ales and Sours. These are the marmite of the beer world, until you introduce them to food. The darker woody beers pair with rich Gamey meats.

My personal favourite; dark chocolate fondant, oozy with mouth coating devilment meets a Boon Kriek (Cherry Lambic) like an explosion. The carbonation lifts the dessert from the palate, then it intermingles with the cherries creating a false Black Forest Gateau.

Environment, think back to that ice cold beer you had on the beach during your holiday with Burriata Di Buffalo & basil, yet on a cold grey day in London it’s not the same.

Have 3 different beers, just as not every red wine works with a venison pie it’s the same with beer. This is especially when you are enjoying a cheese or meat board. Barley wine’s support a Stilton or a strong rind wash cheese but will dominate a Creamy brie, this would prefer a fizzy IPA or Pilsner. Cheddars, Emmental and Goudas will love to meet something with more malt and woody hops (Timothy Tailor Landlord)

Importantly, experiment, no-one palate is the same and you will find your perfect beer partner.