The Return Of The Brewery Tap Room & The Good, Bad & Ugly of Mass Catering 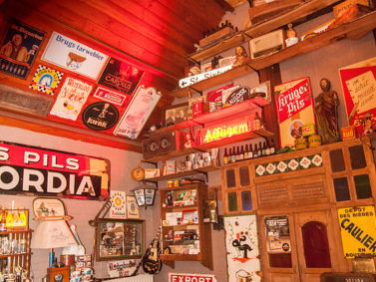 There is a developing trend in the beer industry, the return of the Tap room, something that to me is not novel. During my tours of Europe its usual, not to find a brewery that does not have a tap. These are wonderful areas to stop and enjoy the freshest of beers, normally with something a little different to attract the tourist. D’Oude Maalderij, (a self-built brewery near Kortrijk) has one of the best collections of pinball machines I have seen but also an X rated toilet. Which attracted more attention from my travellers than the aged beer list.

Mass production combined with tied pubs, lead to the demise of the ‘Tap’ in the UK and I am very pleased to see its return. It gives the brewer an extra income, the traveller another place to stop and income to local economies, sometimes a pub to a village that no longer had one.

Recently I attend the opening of the tap for All Day Brewing. Travelling up the long drive you pass the hop poles that will supply next year’s hops, followed by the cows that will be enjoying the spent grain from the mash. Sitting in the sunshine watching various insects dive bomb the pond whilst drinking one of their barrel aged beers is a one of life’s simple pleasures.

Some other tap rooms include, Chalk Hill, Fat Cat Brewery Tap, St Andrews Brewhouse, Redwell, Humpty Dumpty, St Peters, Woodfords (although more of a restaurant/pub) and soon Wildcraft along with a few others. Plans have now been passed for Duration Brewery near Castle Acre. The Tap room is a feature that will enhance the visitors experience of this historic site.

This month I have experienced the Good, Bad & Ugly of mass catering.

I am ok a fixed menu when there is a large party going out for a meal, but usually you are given a choice of 2 dishes. During a family visit to one of the Holiday Inn (Norwich Airport) ‘event nights’, we were told we had, Sausage & Mash followed by Eaton Mess (only changes for allergens), this does not scream to me celebration, just cheap. But we all wanted to celebrate and had already paid so off we go.

Ok, the sausages were good, the gravy and mash passable but the peas… over cooked hard pellets of inedible green bullets. Only for this to be followed by a disaster.

Eaton Mess should be, Strawberries, cream and CRUNCHIE meringue pieces, mixed together to create a textural delight in each bite. Not this… bland strawberries could be identified, there was certainly cream, but we all had to play hunt the meringue, I found a piece of sugary mush. We envied the people allergic to cream, with their delicious fresh fruit salad.

As a family we celebrated, danced to an ‘interesting’ DJ (not sure he remembered the brief) and had a few drinks, we would not go there again for the food or the tired décor.

A few days later some of us headed to the Glasshouse for a meal, ok it’s a Wetherspoons, but no pre order, I even used the app. The drinks turned up, the food shortly after, they dealt with the allergens, there were no complaints about anything. The food is not the most inspiring, but its reliable, mass catering on a grand scale, that means which ever Wetherspoons you visit you know what to expect. It may be all prepared elsewhere and shipped in with the simplest of cooking methods required, but my Steak was cooked perfectly and everything else had flavour, with nothing sitting around under heat lights for ages to get warm and dry. My only issue with this bar is that it does get noisy, but then it is busy.