A Visit to Pilsen And A Crash Course in Lager 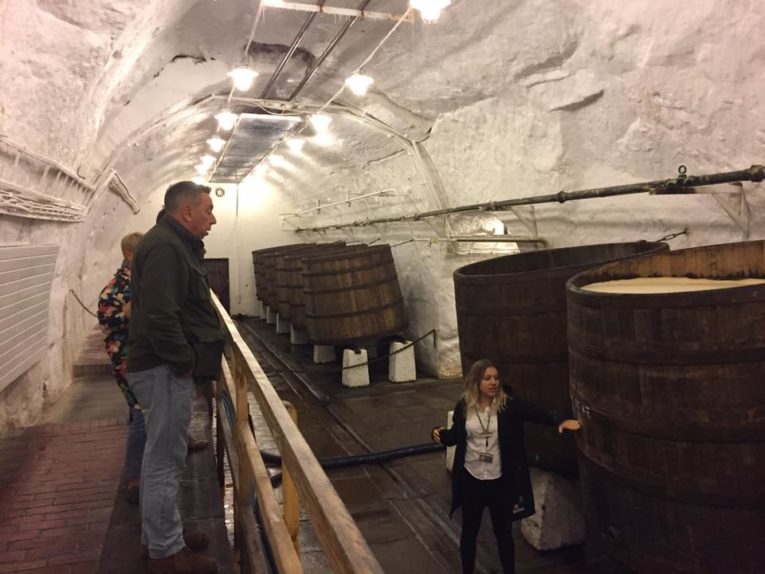 My first visit to the Czech Republic has been a crash course, in Lager, (A beer style much maligned over the years. Yet has a complex diversity hidden in its simple clean taste) and history.

For the first few days my base was Pilsen, traveling through rolling hills to my central hotel (the Marriott Courtyard) I was greeted by Martina who took me under her wing. The early flight left me a bit jaded but plans were afoot. My first beer would be accompanied with a Beer Spa. We travelled the short distance to Chodova Plana and the town brewery. If you like caves this is for you, as these caves are the setting for the aging of the beers and the restaurant. The brewery and spa were in a building surrounding a courtyard with a beer fountain. I have never bathed in beer before, unless you include beer shampoo. I will spare you the pictures, but I can honestly say it was a very uplifting yet relaxing experience I will never forget.

Pilsen is a delight for anyone who likes to meander around streets stuffed full of history. A mix of architecture, high baroque from its time under the dominance of Austria to imposing angles of Soviet oppression. I had not expected the divine hidden gems of Adolf Loos Art Deco we explored with our guide Maria Zemenova.

The home of Skoda has a food range that is designed for the industrial worker, high in carbs and full of flavour, with dumplings that took me back to my grandad’s signature dish. This food is a perfect match to the beer founded here in 1842. Pilsner, high in carbonation yet light on the palate. The beer has a backbone of malty sweetness with a light floral hop bitterness. Traditionally brewed using the method of Decoction, where some of the malty water (wort) is taken out and heated to a higher temperature so that the sugars start to caramelise before being added back to the brew. Czech hops are then added before the slow acting yeast begins to transform the malty, herbal liquid gold into beer. Forget your beer produced in 14 days as seen on TV recently (Carlsberg) a true lager should be cold stored for at least 4 weeks, this allows the yeast to totally clear naturally and gives you that clear, clean crispness that cools you on a summer day.

In addition to Pilsner Urquell (surprisingly over the road from my hotel) the craft beer scene is making waves. At the Beer Factory you will find beers influenced from around the world brewed on site and served with traditional food. Then off the beaten track is Raven, beer brewed with saffron, it is a craft beer mecca. What can top this? Well a beer festival of course. The ‘Sun in The Glass’ festival. Based in the grounds of Purkmister brewery and spa. What began in a small courtyard now takes over 4 and the open spaces between. Families wander around enjoying the sun while visiting each of the local mircobrewery bars. Your small glass is refilled for less than 50p.

I can now understand why people have been telling me for years I have to visit the Czech Republic.

The city and people of Pilsen are like their beers, light, yet have such hidden depths, with beer flowing deep in the roots of their city.

Special thanks to Martina from Visit Pilsen for all her guidance